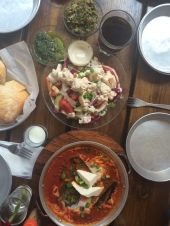 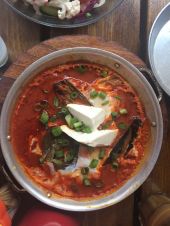 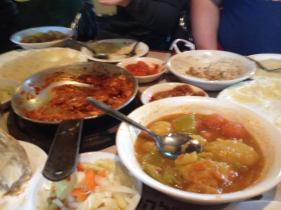 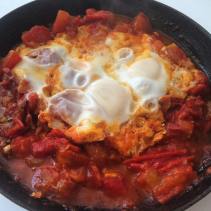 Shakshuka is everywhere. In the last few months, the picture of eggs poached in a red sauce and served in an iron cast has become the most common thing I see on my Instagram.  However, shakshuka has been around for ages; I am sorry to tell you, but Ottolenghi did not invent shakshuka. Somebody, centuries ago created this dish in North Africa, maybe in Lybia, maybe in Tunisia. Is it a Jewish dish? I’m not sure. But from his or her kitchen shakshuka travelled to the Middle East and became extremely popular in Israel, especially in Tel Aviv.  However, as far as I know other countries like Turkey also have similar dishes and I know for a fact that Palestinians also love it.  A Moroccan woman in Israel also told me once that shakshuka was the name of the sauce, and it did not need the eggs to be called like that.

Independently of its origin, shakshuka is now the trendiest brunch food in New York and London. In Tel Aviv it has been in the menus for decades. Almost every restaurant offers it, and there are thousands of varieties. However, I still love Dr. Shakshuka in Jaffa, an extremely popular restaurant that serves excellent Lybian food in ridiculously big portions. Just don’t try to go on a Saturday morning as you will find it close: it is a kosher restaurant.

So here is my recipe for Shakshuka. No, is not a quick one so I recommend you to cook the sauce the day before or make a lot of it and freeze it (although it last for a week in tour fridge). Remember also that the heavier the pan, the better and that ideally you serve shakshuka in the pan.

4 red peppers (I prefer to use romano peppers) cut into 3 cm squares ( you do not need to measure them, is just my way to tell you not  to chop them)

1 red dry chili ( I used ancho, but use any chili you have fresh, dry anything.. or don’t use it)

To serve: You can serve this with a side of tahini sauce and bread ( Challah is the traditional Tel Avivi choice but feel free to use sourdough or even pita), you can top your shakshuka with feta cheese, zaatar, coriander, parsley… Anything you want!

As mentioned before, you can do this part the day before.

Remember, you are having an Israeli style brunch so the idea is that everybody in the table can share the shakshuka… Double dipping is the right thing to do!

*Mix the tahini paste with lemon juice,  garlic (optional) and cold water until it gets the texture you wish. Do not serve the paste directly from the jar!

Not in the mood for cooking?

These are my favourite places to get shakshuka in London:

The good egg http://www.thegoodeggco.com/ ( long lines but worth it! Also try the sabih) 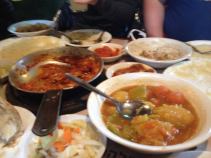 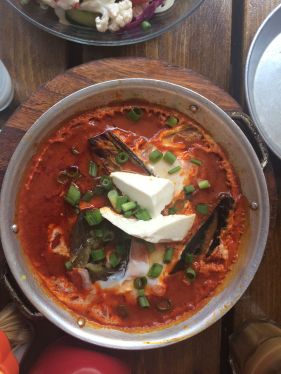 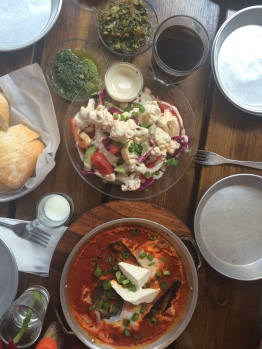 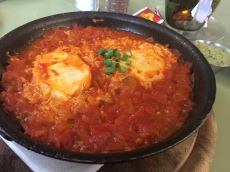 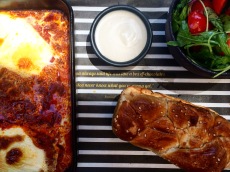