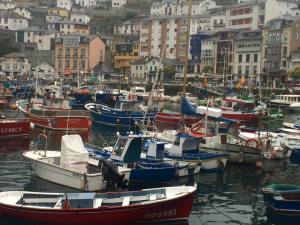 There are hundreds of culinary tribes out there. Gluten-free people, vegetarians, vegans, pescetarians, flexitarians, lactose-intolerant, people that don’t eat red meat but do eat chicken, coriander haters, detox-obsessed, cold-press juice lovers, carb avoiders,  and of course kosher and halal keepers. However, there is one more tribe, a silent, discriminated group of people that nobody talks about: the people that don’t eat fish.

I am one of them. I want to say I have always been a member of this tribe,  but my mother will tell you that is not truth. I can tell you I have a childhood trauma, which I do not like fish on my plate or my beach, but I would just be making excuses. I simply hate the smell of fish.  You probably have at least one friend that hates fish, but modern society has told us not liking fish is not ok. So we hide, lie and come up with non-existing allergies.  You can go to a dinner party and tell the host “ I do not eat red meat”, or even “ I only eat free range eggs, and ethically sourced beef.” However, if you tell them “ I do not eat fish or any seafood” her answer will not be as kind as if you have told them you only eat mushrooms picked in the autumn by blind pigs in the north of Italy.

So why is it ok, even cool to avoid bread and pasta without a medical diagnosis but is not ok not to eat fish? Well, that question has haunted me for decades. Traditional vegetarians eat fish as if living in the sea made you a less important being than if you live in a farm. Fish are also not as cute as spring lambs and in a society that measures the value of an animal according to how fluffy they are, fish have definitely lose the battle. I do have used the excuse “I do not eat tuna because dolphins get caught in the fisher nets” and my feeder at the moment has looked at me convinced of the ethical value of my food choices.

But the thing is, people that don’t  eat fish exist, and we are a lot. We are a close, selective, peace loving group of people that can’t stand the smell of paella on a Sunday. We do not understand the fascination for lobster, the thrill that people get when they eat an oyster and passionately tell you “ it is exactly like having the ocean in your mouth.”

I have the joy to count among my friends with at least three members of this almost secret society. I can also tell you that I felt in love with my husband when I heard his laugh for the first time, but the minute he told me “ well, I am not crazy about fish” I knew we were made for each other. I understood what complicity means one day that I was sitting in a restaurant next to the beach with a large group of people and found the other person ordering pizza. When I hear somebody openly and unapologetically saying he does not like fish, I simply know I have found a new friend. I feel sorrow when I hear a person saying“ yes I am allergic to fish, well to anything that swims, yes yes is weird.” I know the truth, I know his inner child still remembers the lunches he had to endure when he was invited to his friend’s house and was confronted with fish fingers.

But the thing is, I am a food anthropologist. We could say, I eat for a living. Yes is great, interesting, unconventional, but is also sometimes a nightmare. Before I started my Ph.D. fieldwork, I had to teach myself to eat fish. There was no way I could sit down in hundreds of Shabbat dinners and not eat fish. So I learned, I suffered, but I can now sit down, eat my fish and not agonize for days before and after. I still need a big glass of water in front of me, and I will not eat anything with eyes or bones as  I have not yet developed the skills that are necessary to avoid choking with a thorn.

The path to be able to eat fish was not easy.  One of my worst experiences was when I was invited by one of my research informants to a Greek restaurant in Tel Aviv. I said I did not eat seafood, as that was quite common in a kosher country. She thought that was a reasonable excuse, but eating fish was unavoidable. We arrived at the restaurant, and after a few drinks and an incredible selection of Greek salads, the main attraction arrived: fish liver, a Greek delicacy. I wanted to run away and cry, but I stayed, I was brave, and I ate it. I got drunk in the process of doing it, and I also developed an obsession with raki/arak/ouzo or any variety of anise flavoured drink. However, my efforts were well paid. During that meal, I heard an incredible love story that involved spies that loved champagne and caviar,  an Italian priest that ran away with an Israeli rebellious married pioneer woman,  a Moroccan aunt that substitute saffron with turmeric and an unfaithful chef.   Yes I only ate ice cream for a week after, and the texture and flavour of that liver still lingers on my tongue, but that story… That story was worth every bite.

However, my biggest challenge came a few weeks later. And yes, a lot of you know what I am talking about: Gefiltefish. The famous gefiltefish, a traditional European Jewish dish, eaten in Passover and hated by a large percentage of the world population. I can almost say that I might make a career from my repulsion for this dish. People that have the courage to eat it will only eat the one prepared by their grandmothers, and apart from one person with an intense need to prove her belonging to Judaism, I have never found anybody that says “ I love Gefiltefish.” So this ground fish with carrots and sugar is possibly the worst nightmare of anybody in my tribe. However, it was my job to try it. The day came, the Passover dinner and the Gefilte fish was there. A huge ball of fish in front of me, prepared by a lovely Ukrainian-Israeli grandmother and with all the symbolism that an almost millennial culinary tradition can give. But I could not do it, I looked at it and said: “ I am sorry, I am allergic to fish, can you pass me chopped liver?”

The people that don’t eat fish are my favourite people. My husband and I have hundreds of differences, from political to religious. But when I hear him say “ I do not feel comfortable having fish in the house” I know our love is forever.